Happy New Year!
Alexander Marchant will be hosting fun and informative events in 2023.

Please inquire about the schedule of events in January, February and March.


We are pleased to announce the opening of our Oklahoma City showroom… grand opening soon!

If you are looking for a true piece of art, much like the decorative hardware found in Palais de Versailles, the Chlothar Door Hinge fits the mold.

In the early part of the XVIII century, the beginning of a long tradition of Bronze d’Ameublement et de Bâtiment began in France. This use of bronze for decorative hardware was the achievement of one man: André Charles Boulle (1642-1732).  The Chlothar Door Hinge, by Bronzes de France is part of four distinguished collections, the designs and the models of which were passed down through generations of the families who originally created them in the XVIII and XIX centuries.

Bronze designs are cast in traditional methods of hand craftsmanship and the intricate detail is accentuated using the same techniques of hand chasing that are used in the making of fine jewelry.  In the XVII century, craftsman used a sand cast process.  However, today they use form of casting as well as the Lost Wax process, which gives much finer detail to the castings. Making the finishes vary detailed and expensive. 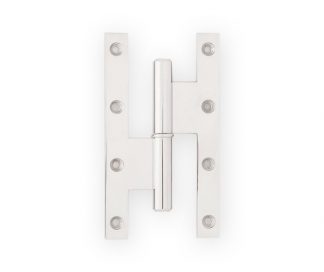